As the last summer day fades,
all is illuminated. 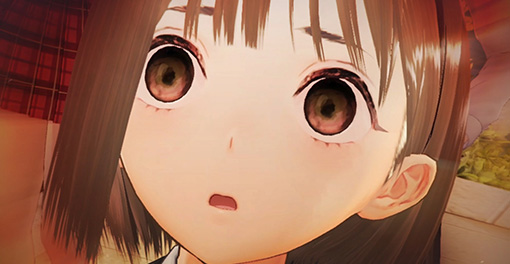 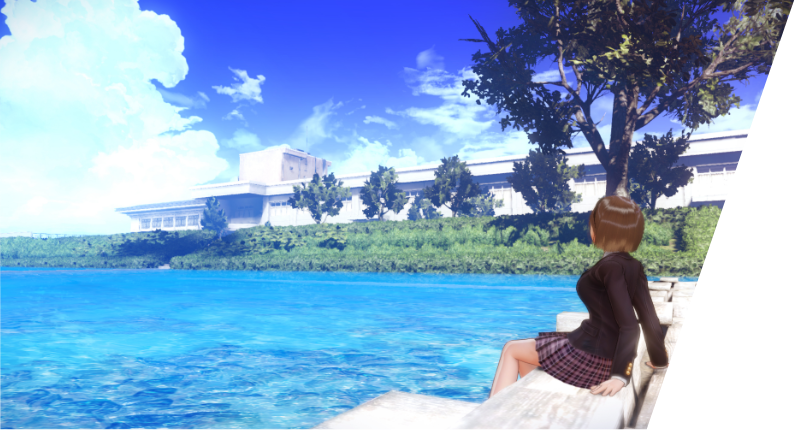 Under the piercing blue sky of summer,
there exists a unique academy. 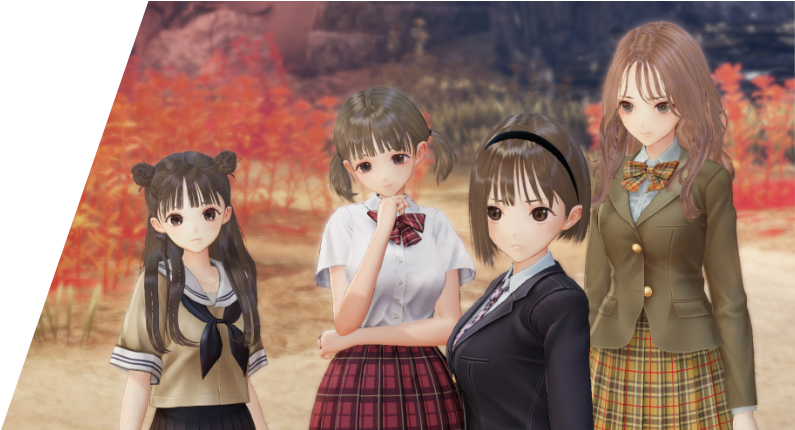 There we meet
students who lost their memories. 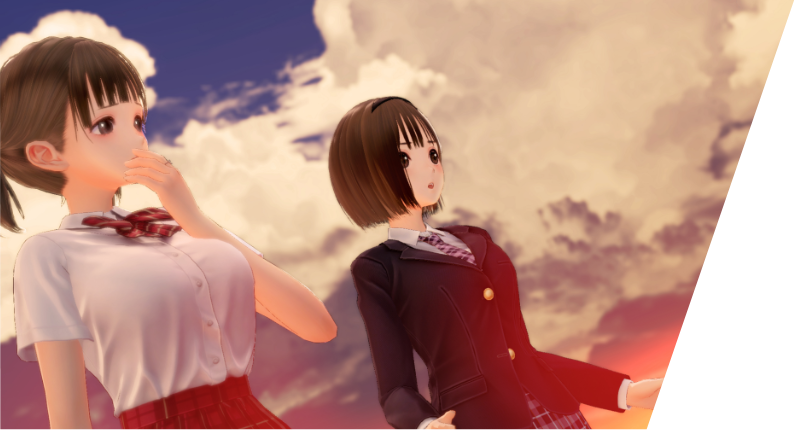 Why were they gathered here?
Will they be able to get back to their world? 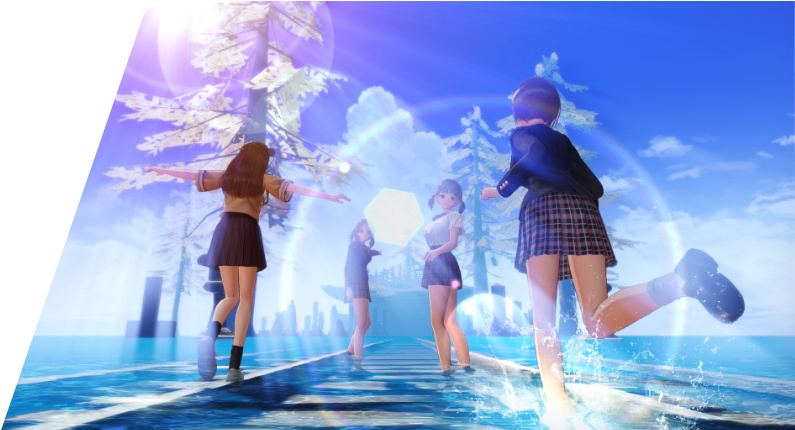 The journey to find an answer
to these questions begins.

“Aah! I don’t get it!
Just what’s going on
with this world?”

A student living an ordinary daily life. After failing her end-of-term exams, she enrolled in a summer academy, but ended up wandering into an unknown world. In this world she meets Kokoro, Yuki and Rena. Together they work to find a way to return to their own world.

The first person whom Ao met when she wandered into the unknown world. She tends to do things at her own pace and seems to let her mind wander aimlessly. She is serene and was very nice to Ao when she suddenly arrived. After losing her memories, it is unknown whether she is originally a resident of this world or if she, like Ao, is from another world and wandered into this one.

“I wonder why
we ended up here!”

A student living with Kokoro inside the academy. She has a bright temperament and is full of energy. She acts like a positive influencer inside the group and spends her days searching for fun things even in this abnormal situation. She suffers from memory loss.

“Good grief.
What about searching
for a bit?”

Another student living with Kokoro inside the academy. She has a tendency to look at things negatively, and is often sharp with her words but has a good heart. Always taking a step back to see the bigger picture, she is the one charged with calming down the members who tend to be a bit too reckless. Rena has lost her memories.

A student who appeared before Ao’s group after a certain event. Once a ballet dancer with incredible potential, an injury to her foot made her unable to dance. She has lost her memories.

“Are all of us,
trapped here?”

A student who appeared before Ao’s group after a certain event. A kind and studious honor student, she likes to take care of others and is an expert in domestic matters. She has also lost her memories, but Kokoro seems to know her.

A student who appeared before Ao’s group after a certain event. She is brightly expressive, athletically gifted, and has an honest personality which makes her easily approachable. She has also lost her memories, and is looking for her “sister”.

“There's no way
I could forget!
I will never forget
you Hiori.”

She appeared before Ao and her friends after a certain event. She is Hiori’s big sister. Mio is calm in all circumstances and lets out a somewhat mysterious aura around her. She lost her memories of everything but Hiori.

She joins Ao and her friends after a certain event.She is quiet and straightforward, but she is also not very good at sensing people's feelings.
She has lost her memories like everyone else, but some of the other students are wary of her for some reason.

“I feel like there's some
kind of important
task I must
complete here.”

A girl who appeared in front of Ao and her friends after a certain event.
She has a mysterious atmosphere, occasionally uttering prophetic words.
Kirara also lost her memories, and was found unconscious.

Even in this unreal world, the students cooperate and struggle
to make their everyday-life as rich and fun as possible.
By deepening their bonds, Ao and her friends will eventually grow closer to the mystery of this world and the reason why they lost their memories.

The everyday-life at the academy

The demo is now available on PlayStation Store and Nintendo eShop! In the demo, you can play the "Prologue" part and the "Story" part. In the "Prologue", you can experience the beginning of the story where the main character, Ao Hoshizaki, wakes up in another world, and in the "Story", you can experience the basic gameplay such as crafting, exploring Heartscape, and fighting. The characters appearing in this part are Ao Hoshizaki, Kokoro Utsubo, Reina Miyauchi, Yuki Kinjou, as well as Hinako Shirai, Shiho Kasuga, Kirara Kuno, and Hiori Hirahara.

Bonus for clearing the demo 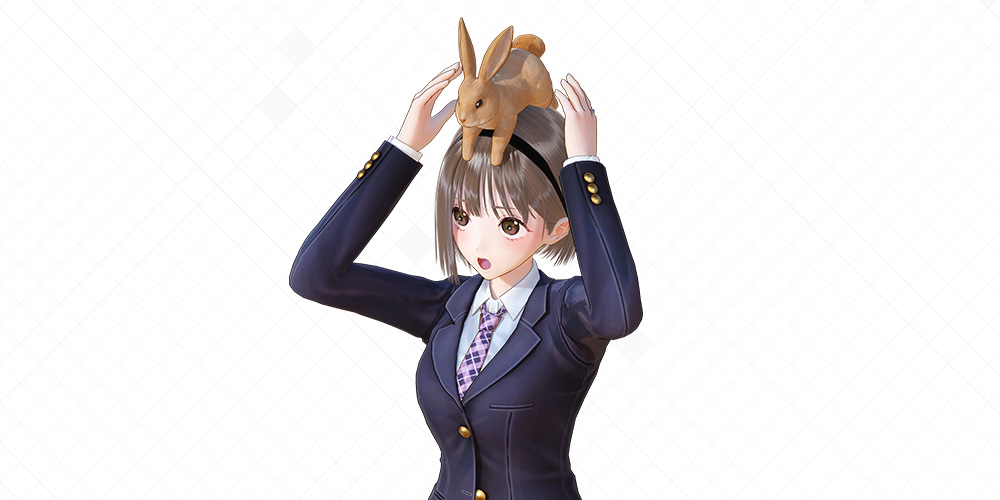 ※The bonuses are only accessible to those who possess the save data obtainable after clearing the "Prologue" part of the demo.
※To load the save data from the demo on the full version of the game, the game needs to be updated to the latest version. 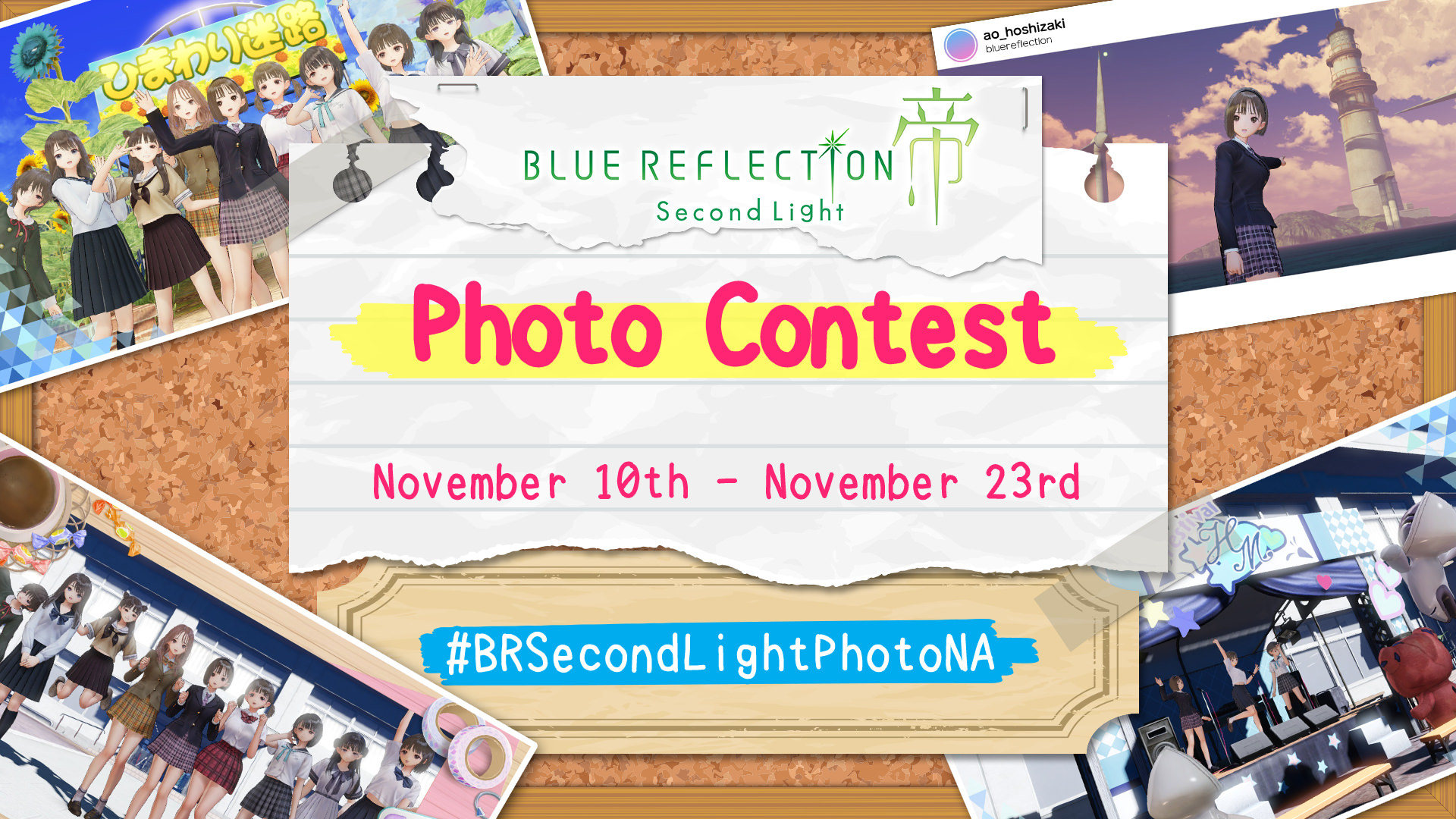 Announcement of the results

Thank you very much for all the entries.
The selection of photo spots, compositions, poses, and other aspects of the photos were all very interesting and we had a lot of fun selecting the winners.
Here are the prize-winning photos that we selected from the many wonderful entries.

To celebrate the release of the game, we will be hosting a photo contest for all our fans! Create memorable photos in the world of BLUE REFLECTION: Second Light, and share screenshots of your favourite characters in event scenes, at your favourite academy facilities, including Photo Mode. The dev team will select winners from the submitted screenshots and announce the winners.

Additionally, ten participants will be chosen via lottery for a chance to win a BLUE REFLECTION: Second Light themed clear file.

Winners will be announced at a later date. Good luck, and we look forward to receiving your submissions!

You may enter as many times as you like during the contest period.
Please submit still images only taken by yourself.
Please do not alter the image data you have taken.
You can submit screenshots of either the full version or the demo version of BLUE REFLECTION: Second Light. 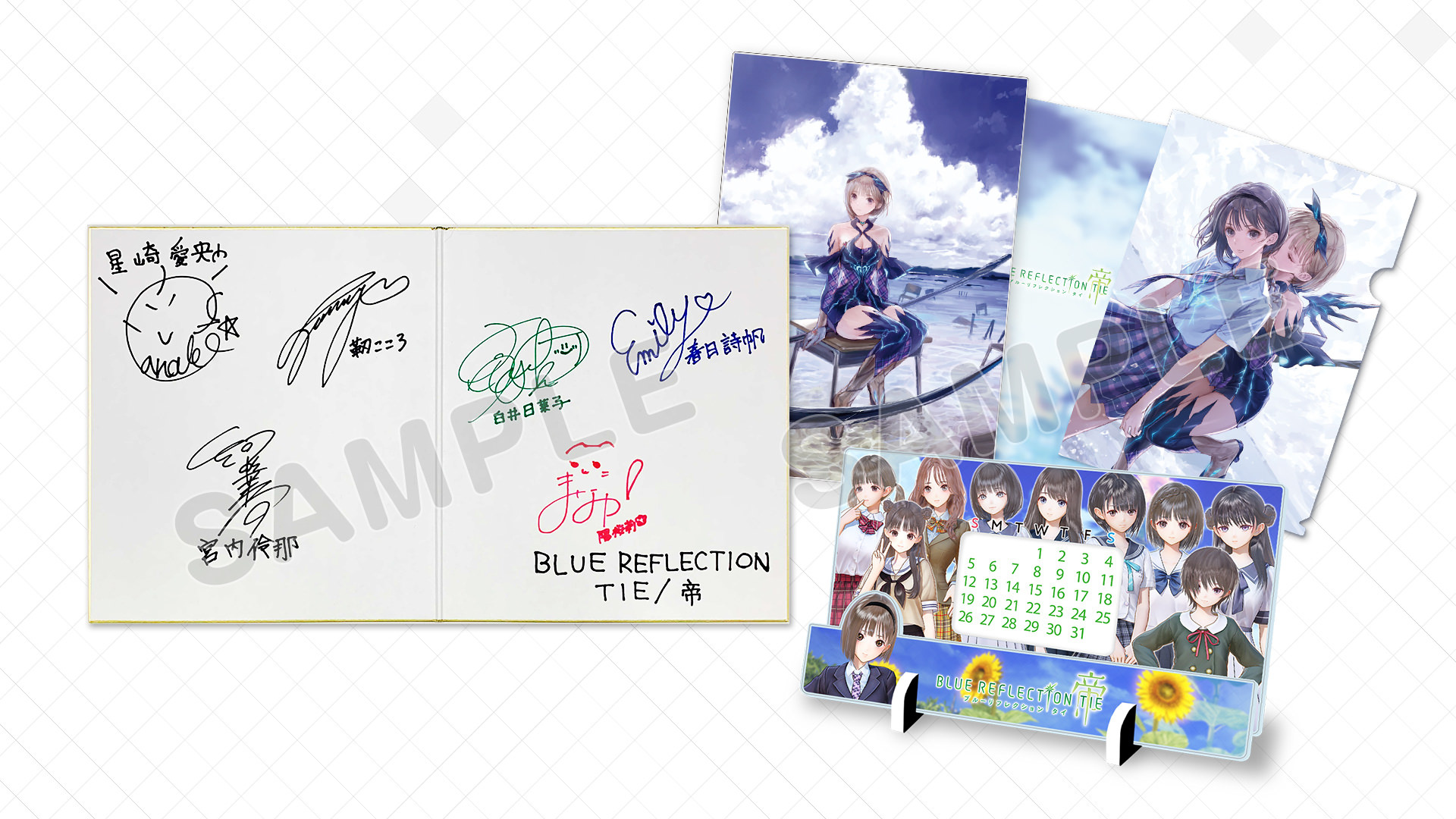 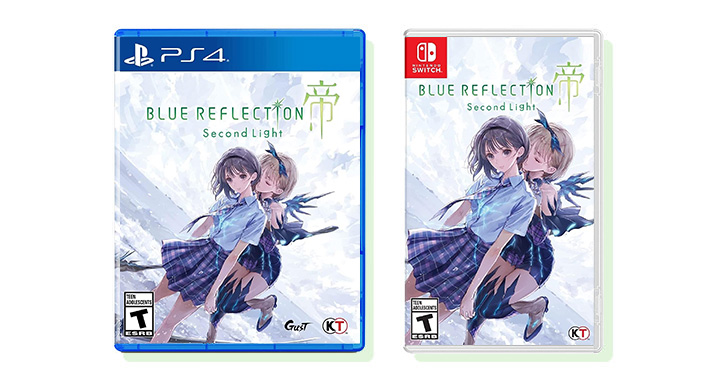 *In-game audio is in Japanese and all text is in English. 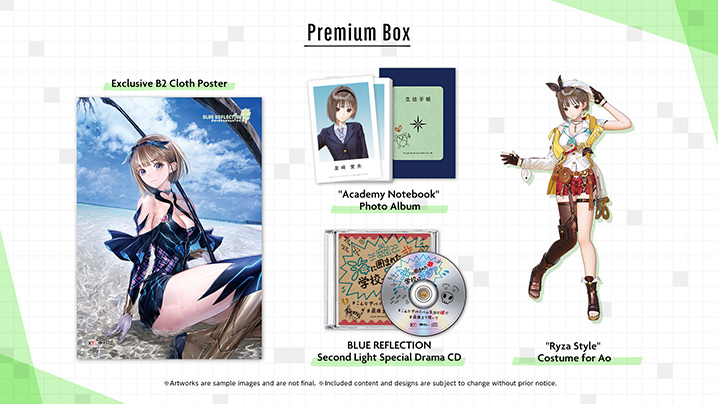 ※"Ryza Style" Costume for Ao is planned to be released for free at a later date. 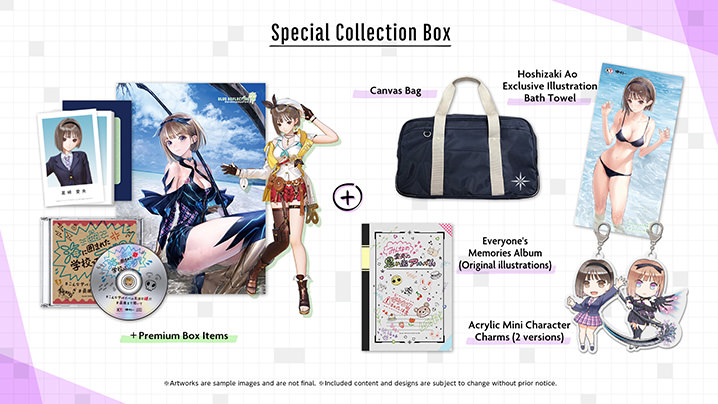 
※"Ryza Style" Costume for Ao is planned to be released for free at a later date. 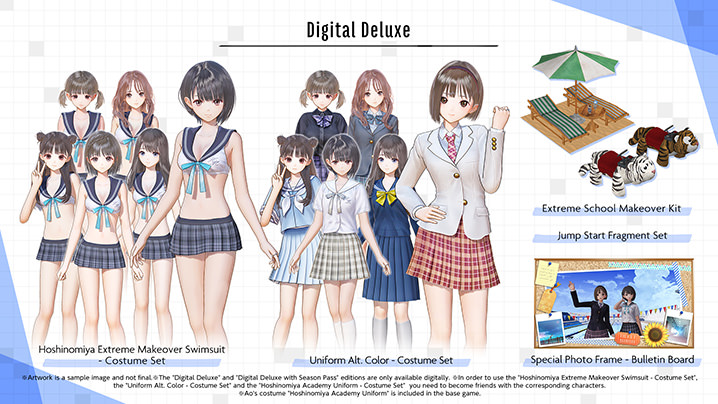 ※The Season Pass will be available for purchase separately at a later date. 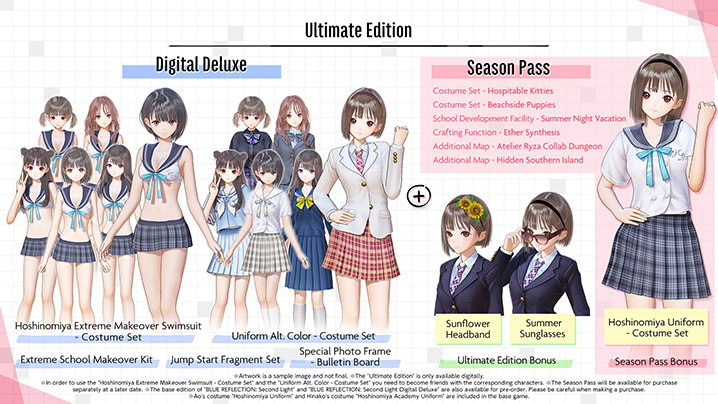 ※The "Ultimate Edition" edition is only available digitally.
※In order to use the "Hoshinomiya Extreme Makeover Swimsuit - Costume Set" and the "Uniform Alt. Color - Costume Set" you need to become friends with the corresponding characters.
※The Season Pass will be available for purchase separately at a later date.
※The base edition of "BLUE REFLECTION: Second Light" and "BLUE REFLECTION: Second Light Digital Deluxe" are also available for pre-order. Please be careful when making a purchase. 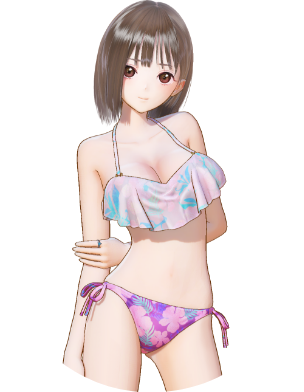 *DLC is available for purchase via the PlayStation™Store, Nintendo eShop, or Steam® Store. 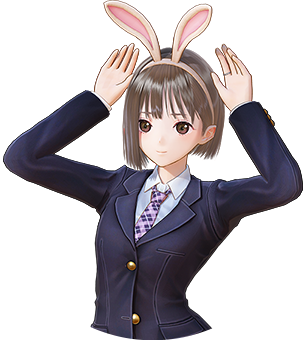 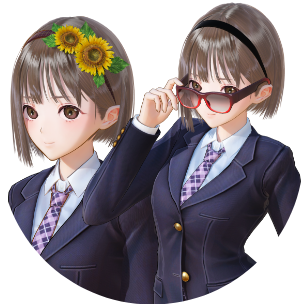 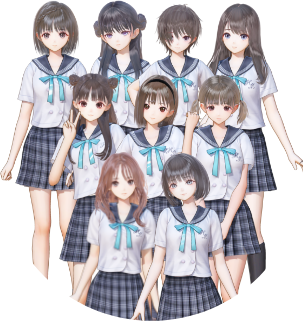 Details about the Season Pass 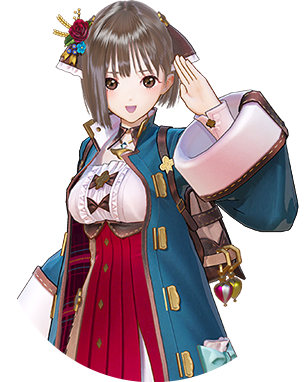 Each of the costumes will be unlocked in their respective game for those who own both the “Summer Bikini” early purchase bonus for BLUE REFLECTION: Second Light, and the limited time bonus Sophie’s costume “Comfy and Casual” for Atelier Sophie 2: The Alchemist of the Mysterious Dream.

* For the PlayStation®4 and Nintendo Switch™ versions of the game, if the game age-ratings of BLUE REFLECTION: Second Light and Atelier Sophie 2: The Alchemist of the Mysterious Dream are different in your region, the bonuses may not be available.

*The tie-up bonuses will become available after the post-launch update for each game. (Update timing is TBD)

*The system data for both titles must be for the same platform and saved on the same hardware (console/PC).

*The bonus DLC may be made available for sale at a later date. 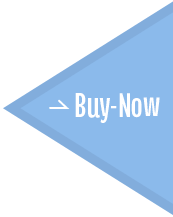 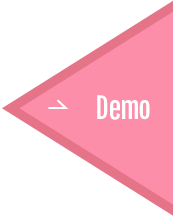